The Crossing Chronicle • May 14, 2021 • https://gcwarhawknation.com/1009/features/turner-helps-keep-the-warhawk-nation-informed-through-social-media/ 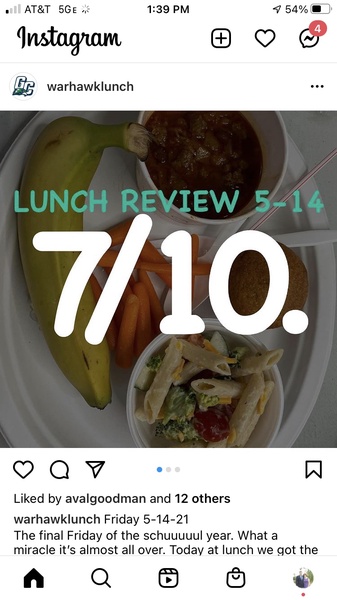 Turner's daily reviews of school lunch has captured the attention of individuals both in and out of GCHS.

Have you ever wondered about the person running a social media account? Many are curious as to the individual who operates them. One account that students have noticed is the @warhawklunch page on Instagram who is run by Cash Turner, a junior at GCHS.

Throughout his high school years, Turner has run a variety of social media platforms. “I have operated four Instagram accounts in my high school career. I’ve got my main Instagram, which is just like everyone else’s main Instagrams, just pictures of your life and what you want to show everyone that meets you for the first time,” Turner explained.

His main account isn’t what has caught the attention of Warhawk Nation, however.  He also operates a few different accounts for the school. The one that has created the most interest this year is his lunch reviews. Turner explained, “I operate the @warhawklunch page, which is where I rate every lunch we have each and every day I’m at school.”

This page in particular has attracted members all over the school. Lunch ladies, teachers, and even students who don’t attend Great Crossing, have heard of this famous review page.

Leslie Murphy, a journalism and English teacher at GCHS, said “I actually learned of the Warhawk Lunch instagram account from my daughter, Anna. She’s in 8th grade at Scott County Middle, but she and her friends enjoy looking at the Warhawk lunch reviews so they know what they have to look forward to when they are freshmen here next year.”

This page typically features a photo of the school-provided meal, a rating, and an explanation of the flavors and tastes of the lunch. Turner described how he began the account. “One day I posted a lunch review of my meal in the first week of in-person school on my Snapchat story. Since lunch is now free, I’ve gotten the school lunch instead of packing my own lunch like in recent years. I decided to make an Instagram page for it, because people were telling me how in-depth my reviews were. It all really started as a joke, but now I’m proud of the consistent posts everyday I’ve been at school. The fact that people engage with and like the page motivates me to keep doing it.”

He also operates the Great Crossing Student Y-Club Instagram account, where he posts digital flyers about new events and announcements the club is hosting. Y-club advisor, Maggie Brewer, explained the importance of what Cash does for the club online. “Cash runs all the communications for our club which includes our Remind, Twitter, and Instagram. He also created our introductory video which was used to invite students to join our club.”

Brewer acknowledged that Cash’s contributions have been even more important this school year.  “He posts all announcements, creates flyers and posters, and makes sure that club members know what is going on and when. He creates google forms for conference registrations, applications, and surveying club interest. This year since so much has been virtual, his job has been particularly important. He has set up all zoom meetings for the club,” Brewer explained.

Turner genuinely enjoys posting on these accounts, and uses the interactions with fellow peers from them as motivation to continue. “Just the fun of talking to people about lunch or documenting my school day is what makes it worth it to me,” he commented.

But Turner is not just known for his activity on social media. He began running a small business nearly a year ago in which his mother would crochet baby Yodas for him to sell. A percentage of the profits made from selling these characters were donated to organizations such as St. Jude Children’s Hospital.

Although these characters were mostly sold to local community members, Turner described how these characters have gone international. “We mailed these baby Yodas all around the US. Somehow, someone in an Air Force Academy in Colorado saw one of the baby Yodas and asked if we could make one with a heart on it for his girlfriend for Valentine’s Day.”

He has also expanded his business to other characters. “More recently, we’ve made crochet Among Us characters and sold them as well.” Turner enjoys being able to give back to the community through these donations and is unsure of when the business will come to an end.

Cash is also known for bringing humor to many situations.  He is the designer behind the PDA posters hanging on the second floor.  What started out as a joke between Turner and pre-calculus teacher Rachel Blevins has become a joke around the entire school. Posters that include funny images were meant to discourage those in high school relationships to engage in PDA, but what Cash was really doing was building school culture.

Blevins said, “Cash has an amazing ability to boost the morale of everyone he’s around! He cares about his classmates, teachers and Great Crossing. He sees issues and addresses them with humor.”

All of these experiences are also preparing Cash for life after high school.  He stated, “I want to go into business marketing and run social media pages. Running these for school has made me realize that I’m already doing what I want to for a job.”