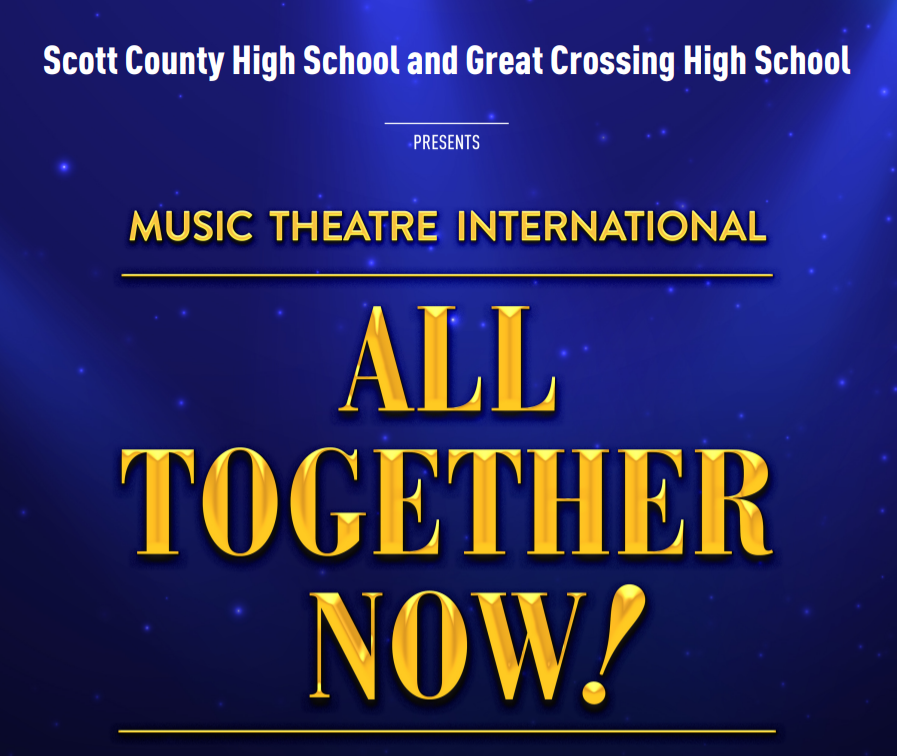 It won't be the Battle of the Birds but rather the Collaboration of the Birds for the fall musical. Students from both GCHS and SCHS will join forces for All Together Now!

On November 12th, the musical All Together Now opens at Great Crossing High School. This is no ordinary musical, as it is the first musical collaboration in Scott County history.

Ashley Peoples, the assistant director for Great Crossing explained, “We had an opportunity to do a showcase that Mrs. Marshall (SCHS) gave us called All Together Now. It was provided by Music Theater International for COVID-19. It was only available for one weekend, which we had planned to do the musical on. Since it is such a big show, we decided that it would be best to do it together.”

Getting people to Great Crossing for practices and performances requires lots of planning. “We got transportation so there will be buses at SCHS to take kids to GCHS for rehearsals. Part of this is because the musical will only be held at GCHS,” Peoples said. This can prevent the future issue of no transportation that kids could face.

With a musical of 15 songs, all from different musicals, the cast would have to be large to pull it off. The collaboration will fulfill this need. Another benefit of having a larger cast will create more opportunities for student actors. In a typical show, students may only play one character. The format of the musical will allow them to explore. “Each song will be a different scene,” said Peoples. “Roles can be switched, kids won’t just be playing one character.”

Students are looking forward to working with their peers from other schools. In theater, there is collaboration without competition, unlike athletics. “I think it’s going to be a great opportunity to highlight all the talent we have in the high schools combined into one show,” said Scott County junior Will Schindler.

The chance to work with others will not only bring a spotlight on all the different talents students have. Scott County junior, Cadence Stilz stated, “It’s super fun. Working with more people is more interesting.”

Another aspect of the combined musical is cost-efficiency. All Together Now is a show provided by Musical Theater International. With this, there are no royalties attached to the songs. Peoples said, “This will allow us to make more profit, we usually pay $1500-$300 in royalties so that will be profit instead.”

All Together Now will be performed in the Great Crossing High School auditorium on November 12-15, 2021. Tickets will be $10 and sold electronically and at the door. Thursday-Saturday’s performances will be at 7 pm, and Sunday’s will be at 2 pm.  Questions regarding the shows can be sent to Ashley Peoples at [email protected] or Julie Marshall at [email protected]