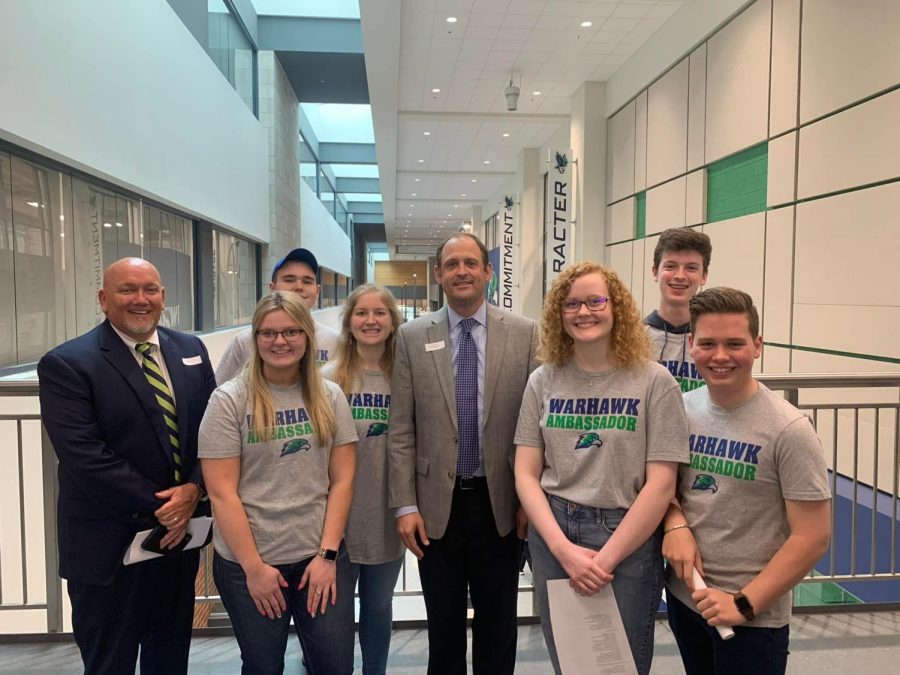 Students met with government leaders to discuss the importance of the internet in their lives. Scott County has received a grant to help fund the expansion of broadband internet.

On April 21, 2022, government leaders visited Great Crossing High School to tour the school and participate in a roundtable discussion about expanding broadband internet.  Charter Spectrum is the internet company helping Scott County implement this new internet. The broadband internet in Scott County will help make it easier for students and teachers to access school work from their homes without using a hotspot or driving to places with accessible internet.

During the roundtable discussion, students were able to express the difficulties of not having reliable internet to the government officials. Senior Tye Schureman said, “I live right across the street from here [Great Crossing], and I still don’t have internet. We’ve tried to get it a couple times, but it’s a huge amount of money to extend a line from the end of our road to our house. It was like ten grand.”

Lack of internet availability was a huge problem in 2020 when schools closed due to pandemic.  Schureman said he had to drive to Great Crossing to get his work done, and he was not alone. Joy Lusby, the Great Crossing principal said, “Students that had no internet access had to move to a paper and pencil concept, because they did not have a virtual option capabilities in their home.”

Students are not the only ones impacted by lack of internet availability.  Many staff members experience this as well. Ashley Peoples, Great Crossing’s technology coordinator, lives in close to northern Scott County and is without broadband.  She said, “We have to hotspot from our phone to get internet. It does make it difficult to do school work. If the kids are working on their devices, it drags everything down on the hotspot.” It’s also expensive to rely on cellphone hot spots, and Peoples explained that she pays over one hundred dollars monthly for her phone bills due to the lack of internet.

Judge Executive Joe Pat Covington has worked on this expansion of the broadband internet in Scott County since he took office, and it’s something he’s believes is important for a community.   “As a former educator, teacher, principal, I just know how crucial it is for not only teachers and students to have access to that activity, but it just makes it such a big difference for just to be able to work from home or [having] telehealth. Just think of the sick child who’s out in the rural part of the community and now they have access to a doctor just from the comfort of their home.  I’ve felt really passionate about it and we’ve worked really hard to make it a reality,” Covington stated.

Internet access is not only useful for school. Having internet access will help people achieve their future goals as well. Andy Berke, a representative from the National Telecommunications and Information Administration, said, “I’ve seen personally how much it makes a difference in lives of individual families. and it’s not just about school, although that’s important. It’s about being able to explore and create and to do things that you find enjoyable. For young people in particular, the internet is a place where they can create their own future.”

However broadband internet is not just something for Scott County. It is going to be implemented all over the nation over time. “This is something that we’re trying to do really quickly, but when we talk about the entire country you know that it’s going to take a while. There is 48.2 billion dollars in the Department of Commerce to do this work, and there’s 65 billion overall in the bipartisan infrastructure bill,” said Berke.