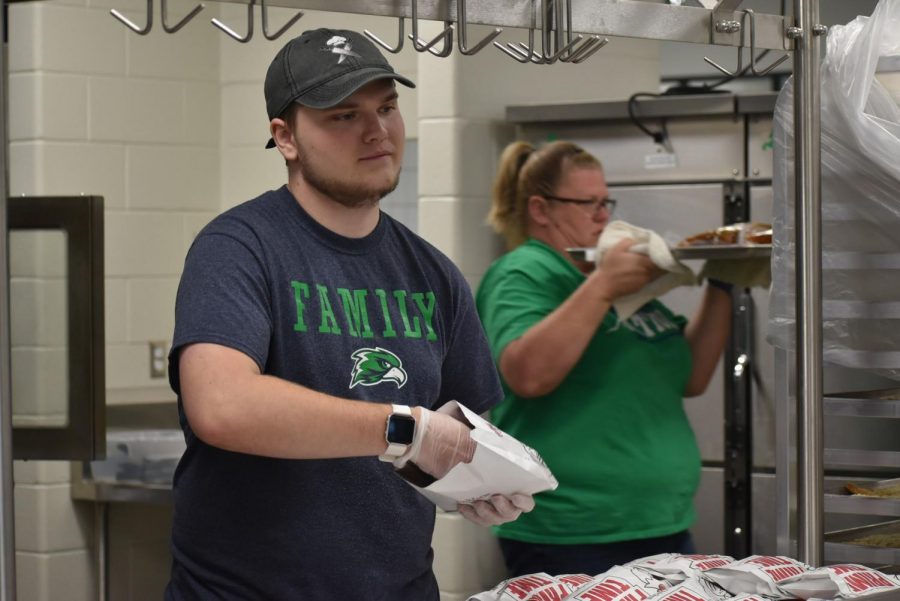 Colton Marshall is very comfortable serving students in the GCHS cafeteria, even though he is the sole nutrition services employee for the building.

Stepping into the kitchen area of the Great Crossing High School cafeteria, one is greeted with a familiar sight. Chicken sandwiches are assembled rapid-fire, and numerous sides form an army of little cups and dishes. An orchestra of refrigerator doors slams, ovens beeps, utensil clinks, and orders being yelled accompanies the grind of the pre-lunch food preparation.

Multiple lunch ladies, some of which GCHS students have known and appreciated for years, are ceaselessly working to craft meals for almost 1,500 students. The faces of the lunch staff,furrowed with concentration on the food, are all well known to the student body. Then, you realize one face is new this year.  And that one face also has a beard.

The vast majority of GCHS students and staff admit to never seeing a male cafeteria worker before, and many also admit that they have found this slightly surprising. “It’s because of the stereotypes ingrained in kids that janitors are male and you have female lunch ladies,” said sophomore Kenlyn Knoblock. “It’s been that why for a while, and we haven’t really changed.”

However, Colton Marshall, GCHS’s only male nutrition staff member, is working to flip this outdated stigma in the district. Marshall worked as a co-op student as a senior at SCHS last year and has now moved into the official nutrition services job, although this is not his first brush with a cafeteria. “I have been around school nutrition all of my life, because my mom has worked in this profession for 24 years,” Marshall elaborated.

When it comes to applying for a school nutrition job, the options are open to everyone. Yet, Marshall has found that it seems that stigma often holds male applicants back.

“Men don’t normally apply for this job. If they do, they are called in for an interview but rarely show up for it,” he stated.  “I am happy to work in the Nutrition Dept. It doesn’t bother me that I’m the only male here. We do have two male CO-OP students, which is what I did last year.”

The Scott County Schools district only has two other male nutrition employees. One is a lunch staff member at Lemons Mill Elementary, and the other works at Central Office overseeing nutrition concerns for the county. Male applicants prove to be rare, but are highly valued amongst both staff and students. Rachel Weatherly, GCHS’s cafeteria manager, expressed that she desires more men to join her line of work.

“I would love to see more men apply for this job, as I feel like it would [create] great role models for our future generations. I really do not feel that school nutrition is a job only for women, although I know society has portrayed it that way. It really is a rewarding job for both males or females,” Weatherly stated.

The students, on the other hand, show no bias towards Marshall amidst all the female employees. The open mindset of most of today’s high schoolers appears to pay little mind to societal standards, but rather encourages diversity in the workplace and out.

“Diversity is always nice to see, especially in a place where so many impressionable minds are,” Knoblock asserted. “Gender [of the staff] shouldn’t be a big issue. I haven’t had burnt food from either gender, so it doesn’t matter to me!”

As of now, Marshall holds the title of the only male cafeteria staff member at GCHS. He, like the students, feels no concern over potential stigma he may face in his field of work. Even though he acknowledges being the only one of his kind, he asserted, “It’s much more common than you think. None of us consider it a big deal.”

He has shown himself to be an integral member of the cafeteria staff, working alongside the women to produce lunches for the students. Each and every member values his company and appreciation for his line of work. “I have known Mr. Marshall since he was in elementary school, so I enjoy watching him learn and seeing his enthusiasm for feeding our students,” Weatherly said.

His position as GCHS’s first male lunch staff creates a legacy that he and the others hopes to continue within the school and radiating through the district. The times are changing, and society’s ideals are changing along with it.

“In other districts around us there are a lot of men. When we have meetings in other districts, there are many men. The stigma is changing. More and more men are coming into these jobs. Not so much in Scott County right now, but there is now three of us, so I think that we will start to see more.”