A New Approach to School Spirit Arrives With a New School 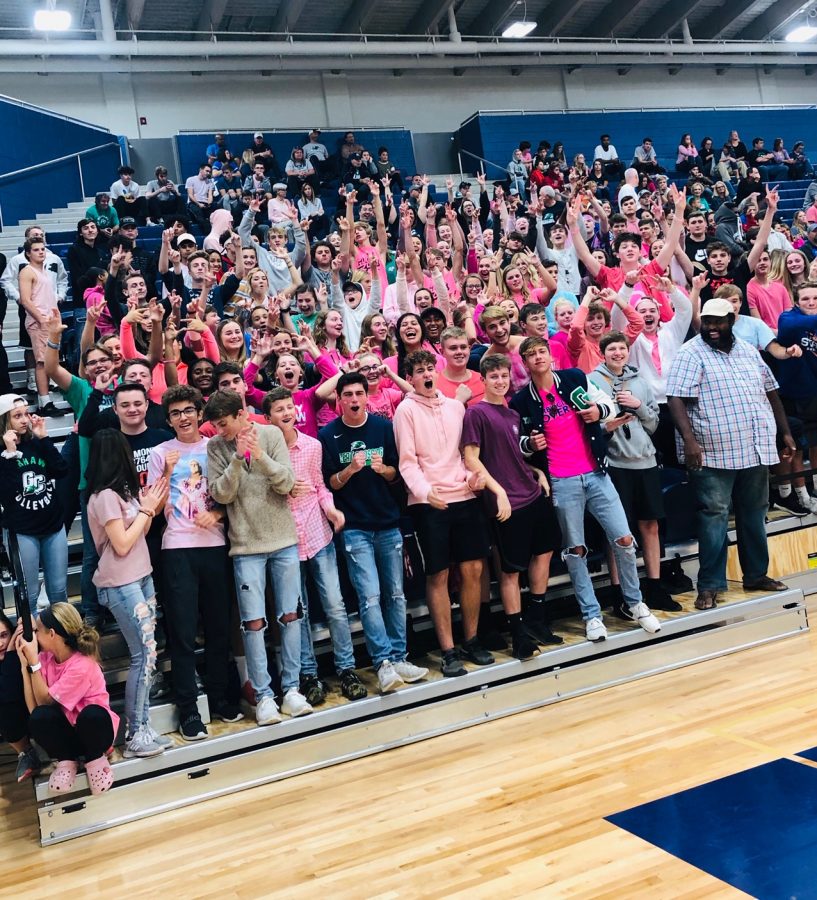 The Kettle has been active at a variety of sports events, not just the football and basketball as has been past tradition. The volleyball team had lots of student support in the first game of the regional playoffs on October 28th, 2019.

The start of the new school year with a brand new school created many opportunities for Great Crossing to become something of its own. One of these opportunities was the creation and development of the Kettle, Great Crossing’s student pep team. The Kettle, named after a gathering of hawks, has been led by student spirit leaders, along with the guidance of a few faculty members, including principal Joy Lusby. These leaders, along with the renowned Willy the Warhawk mascot, have worked to create a student section that is unique.

To make Great Crossing stand out from other schools, the leaders of the Kettle have introduced tailgates.Spirit leader senior Gabe Hogsten explained the reason for this new addition. “Everyone gets really excited for the tailgates, and we think it encourages people to get engaged with the student section.” It draws students in and gives them Hogsten said “a fun, safe, and cheap place to hang out before each of the games.” While doing so, it also helps boost spirit since everyone is celebrating together.

“These tailgates were actually inspired by college football tailgates,” junior Seth Benner explained. “[They] really make our team spirit go up because we always have fun before the game, and  it helps us go in [to the game] with a positive attitude,” Benner added. “We like starting our own traditions and not really copying Scott County.”

Another thing that makes the Kettle stand out is the atmosphere. Hogsten noted, “We get to create a positive atmosphere where students of all kinds can come and cheer on our sports teams. The upperclassmen and I are trying our hardest to include everyone, because it allows everyone to feel involved in our sports which is something most schools don’t have.” This is important, because any exclusion would make widespread support harder to achieve.

While the Kettle is headed by juniors and seniors, senior Emma Spencer was able to reinforce the fact that the group is focused on inclusiveness. “I found that it’s a lot more friendly to all of the classes; you don’t have to be just an upperclassman to participate, and I think it really heightens our school spirit. And it’s been [something] that I’ve really enjoyed as a part of the new school,” she explained.  Spencer also mentioned that seeing everyone at the games, dressed up to the theme chosen by the Kettle, and “having a good time, talking to people they wouldn’t typically talk to, and taking pictures and uniting for one cause to cheer for our team,” has been her favorite part of the Kettle atmosphere so far.

The last big difference that can be seen with the Kettle, though, is the involvement of the mascot. Willy the Warhawk, can be seen at school gatherings or pep rallies, but most importantly the football games; he’s a vital part of the Kettle. Willy, who is a student who wishes to remain unknown, said, “I think it’s really important to have someone down on the field, interacting with the Kettle, giving them motivation, starting chants, getting them all loud and involved with the game, even though it is hard sometimes with our football team and their record.”

Of all these things, though, the one that stands out the most to some of the Kettle, and especially Benner is the respect that is being demonstrated by the student body for its athletes and its teams. “We got a brand new school, so you gotta take pride in it, and respect it.”