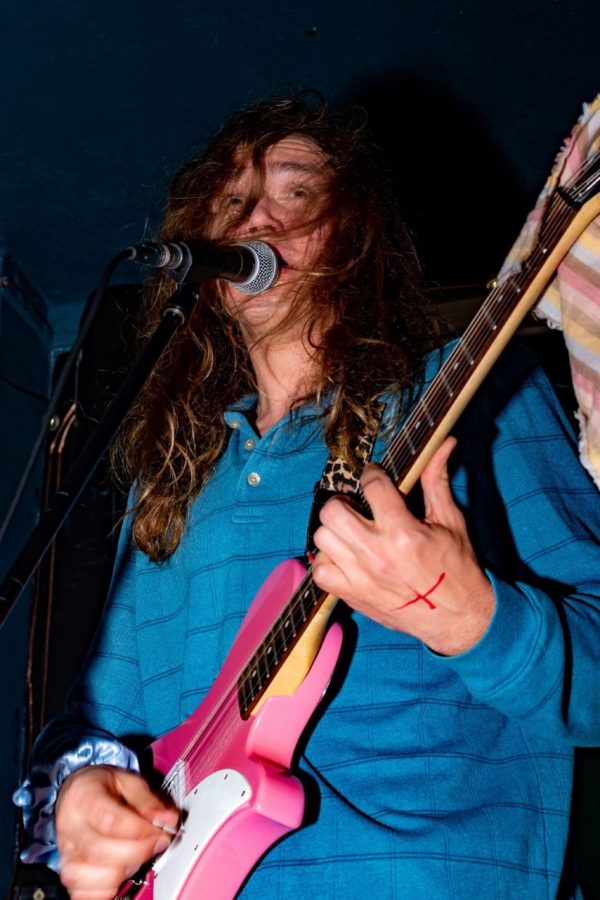 Caleb McClellan has a wide variety of interests that range from music, to student government, to unique fashion. He believes that he should live life in a way that makes him happy.

Live rock music emanates around the band. Standing behind a microphone, a guitar in hand, is junior Caleb McClellan. McClellan, a singer and guitarist for the band, Venice Underwater, can be found practicing with the other band members. This, along with other things McClellan is known for, adds to his personality in a unique way.

McClellan’s band, Venice Underwater, started in the summer of 2018. McClellan said, “I heard Fall Out Boy in a Hot Topic, and I had wanted to start a band ever since.”  His band practices multiple times a week, and they have even performed live shows.

His passion for music is not the only interest he has, however.  McClellan is also a part of Y-Club, a youth service, leadership, and government club, where the members participate in mock government conferences and community service. McClellan said, “For Y-Club this year, I’m running for secretary general at KUNA.” As secretary, he would get the chance to meet people regarding resolutions, and he would also get the chance to pass them. He would also have the ability to start debates and speak.

McClellan acknowledged that his involvement with Y-Club and KUNA has had a large influence over him.  “Kuna has shaped who I am and brought me out of my shell. I remember looking at the officers in 7th grade and thinking that was something that I really wanted to do, so I did it in 8th grade, and I won the second place position. It was an amazing experience for me, since all I’ve ever wanted to do is make people happy, and that put me in a position to make a lot of people happy. And I really would like to do that again.”

The most interesting thing about McClellan, despite his already interesting hobbies and involvements, is his style. He said, “I like wearing the weirdest stuff I can.”  This includes outfits of a wide variety of colors, textures and even patterns. As long as he likes it, he’ll wear it. “I dress in stuff that I think is cool. I don’t put in a whole lot of thought, because with music and stuff, it is objectively bad, you know? But with fashion, if you are confident in what you wear, you can wear anything.”

Sophomore Roxy Lockard, one of McClellen’s peers, said,  “In our school, where a great deal of people tend to follow trends and dress the same, Caleb’s clothing always stands out. I appreciate how confidently he wears his chosen fashion, and how it seems to blend a handful of trends, styles, and aesthetics into his own Caleb brand of apparel.”

All of these things have one meaning in common though. McClellan does these things for himself, and he is comfortable with who he is, which is not always common for a teen. He stated, “Those are the things I do for me. You know, you have stuff that you do for other people and stuff you do for school, and those are the things I do for me.” While a lot of his peers see what he does as unique and interesting, he just sees it as this. “It’s all about being happy. These things bring me happiness and enjoyment.” He isn’t looking to set a trend with his hobbies or style, he just wants to have some fun for himself.