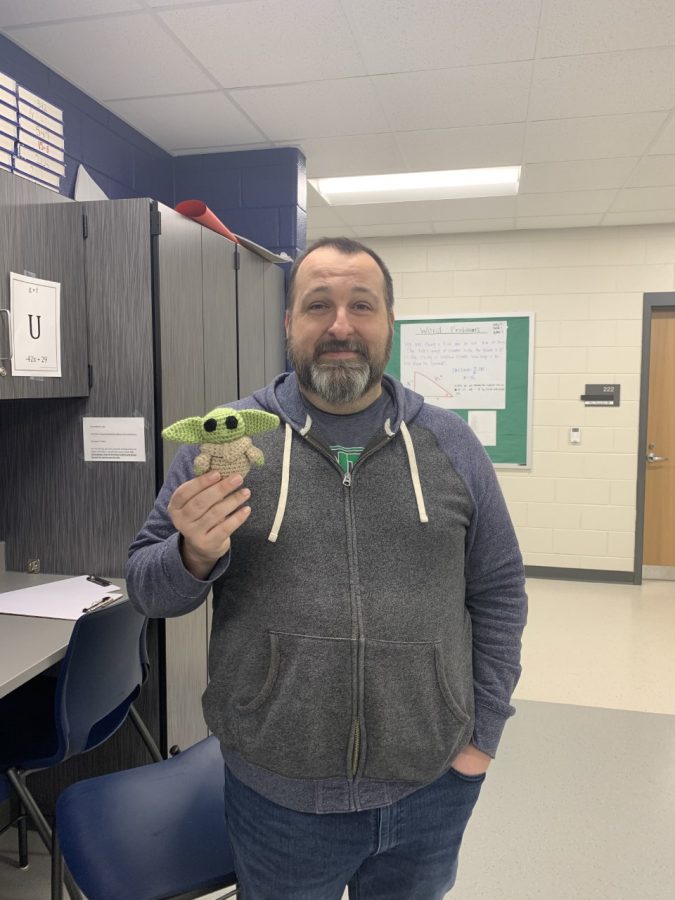 Robert Pigeon was one of the many that jumped on board the baby Yoda craze at GCHS.

This spark is the phenomenon called Baby Yoda.

Since the initial massive flurry of Baby Yoda enthusiasm has slightly settled, now comes the question of why he caused such a stir in the media in the first place, and why he has become such a beloved creature and character. Is it his cuteness? His mysteriousness? His role?

Originally named “The Child” as a prominent character in the new Disney Plus original, The Mandalorian, Baby Yoda has taken the world by storm, becoming a meme and a household name in what seemed to be overnight.  His cuteness and mysterious nature caused the entire world to go Baby Yoda crazy.

His child-like features and hilarious innocence that makes him a highlight of the show, is most likely what placed such a spotlight on him in the first place. The all-familiar face of the Yoda species transferred on to such an innocent character makes Baby Yoda so unique. But while he is the same species as the Yoda we know and love, he is a completely separate character.

Amidst the epic nature that Star Wars has a reputation for, Baby Yoda has provided a contrast to the heroic and more intense portions of the Star Wars universe. But the recent introduction of Baby Yoda, especially since it came as a surprise, made the contrast so much more meaningful. After seeing the impact that Yoda has had on the saga and it’s continuation, Baby Yoda was able to rejuvenate the love for the species in a different light, most likely why it gained so much attention.

“I think it’s just a playful side of Star Wars,” Great Crossing math teacher and Star Wars fan, Robert Pigeon stated. “There are a lot of cute monsters in Star Wars, and I think a lot of people like Yoda, but we’ve just made Yoda cuter than he was before.”

And since the character of Yoda has been around for so long and made such an impact, this adaptation in Baby Yoda is loved by all generations, but his cuteness has a special touch on the hearts of adults. The individuals who have grown up with a very special Jedi master have their own reasons for loving the baby creature so much.

“There’s just something about this baby version of a Jedi master that I’ve watched my entire life,” said Great Crossing High School English teacher and avid Baby Yoda fan, Annette Manlief. “Yoda isn’t adorable.  He’s revered. But Baby Yoda takes this foundation in the force and makes us want to cuddle him.”

This introduces an interesting point. Since his first appearance in Star Wars: The Empire Strikes Back in 1980, Jedi Master Yoda has been considered one of the wisest fictional characters ever created, bringing viewers plenty of wisdom and a special backwards speaking style.

That initial importance and influence of Yoda as a character had a similar effect during that time, as Yoda quickly became such a well-known character in popular culture.

The flipside to the longstanding love for the Yoda species by the older generations is the love that the younger crowd has for Baby Yoda, despite not being around during his earliest appearances on screen. Star Wars is a culture that spans across generations, and with the new sequel movie series beginning in 2015 with Star Wars: The Force Awakens and new releases such as The Mandalorian, the younger crowd has seen firsthand the hype that surrounds the culture of Star Wars.

“I think that both adults and kids both like Baby Yoda because he is just so cute,” said Great Crossing sophomore and Baby Yoda extraordinaire, Cash Turner. “I would say adults are attached to him in an almost nostalgic way because of how iconic the original Yoda is, so maybe that helped them fall in love with Baby Yoda more easily.”

Regardless of the reasons that Baby Yoda is so loved, there is no doubt that he has made waves throughout the media for the past several months. While the much older Jedi Master Yoda has had such a lasting influence on society, the same goes for Baby Yoda. He has the potential to have that same cross-generational influence that Yoda did on current and future generations.