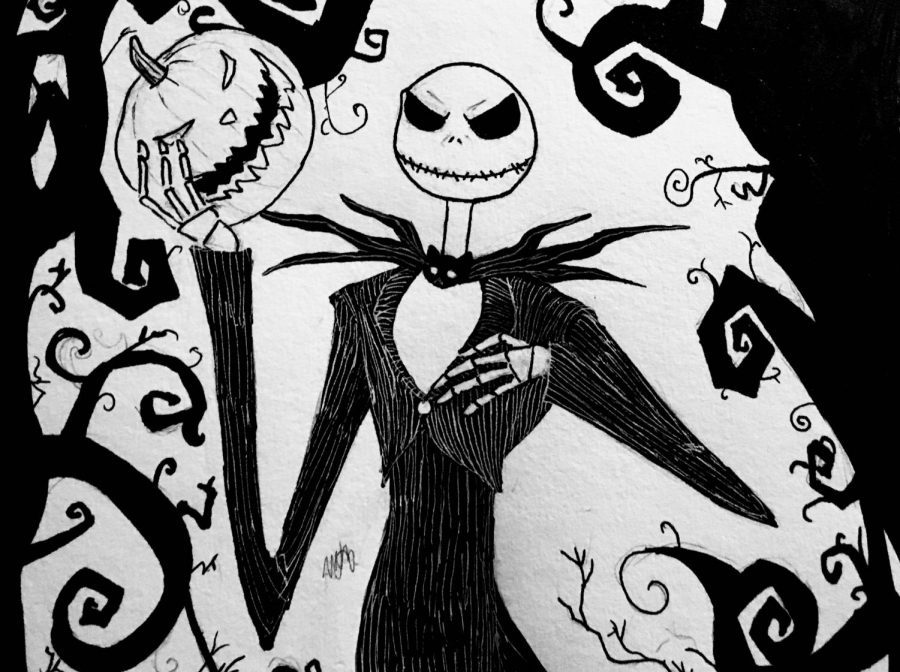 It’s a dark and chilly night, the wind is blowing and the windows are starting to fog up. You, on the other hand, are inside the warm and toasty confines of your home. The living room is covered with Halloween themed decorations like bat pasties and jack o’lanterns. On the coffee table, there’s a bag of Halloween candy from the store to feast on. The lights are dim and maybe you’ve lit a few candles to really set the Halloween mood. A whiff of the room and the prominent smell of butter from the popcorn invades your nose.

The time to pick a movie has come, which do you pick? Will it be the massively recognized and adored halloween movie, The Nightmare Before Christmas? Perhaps Corpse Bride or Frankenweenie? Maybe animation isn’t your thing and you’ll settle for Beetlejuice, Edward Scissorhands, or Sleepy Hollow. These movies collectively have one thing in common: Tim Burton. But how did he and his films take over Halloween movie nights?

The answer lies within the visual aesthetics seen in his movies. Within character design alone, Burton offers characters with ghostly pale skin, and tall lanky figures, and the big circular eyes accompanied with small pupils and prominent bags. Victor Van Dort, the pale white protagonist of the stop motion animated film Corpse Bride, with his long limbs and lanky figure dressed in a black suit and big eyes is a perfect example.

“The big circular eyes in the stop motion movies have always stuck out to me. They’re off putting and haunting yet really pretty, y’know? The big eyes allow emotion to come through more,” Yecenia Carrizales, a junior said.

Burton’s style isn’t only limited to his stop motion projects. Edward Scissorhands exemplifies this criteria with his fair skin and constant sullen looking expression. The scissorhands add to the illusion of him having elongated arms. Beetlejuice is another example. Burton’s approach to character design only fuels the gothic and Halloween-esk vibes that come with his films.

Of course, no Tim Burton movie would be complete without the world building and settings, from Halloween Town to the Victorian style town in Corpse Bride. Burton draws inspiration from German Expressionism and Gothicism and integrates them in the set designs. German Expressionism can be seen in The Nightmare Before Christmas with the angular and swirly landscape in Halloween Town, in the cemetery, and the iconic spiral hill with the moon shining behind it.

In Edward Scissorhands, there’s the gothic black castle that sits atop the hill with the spiral staircase inside as well as the garden that features those recognizable swirly bare Burton styled trees. Juleivi Simon, sophomore said, “Halloween is known for scary stuff, and his [Burton’s] dark gothic style fits into the creepiness of the holiday. I love the settings and the glum and gloomy tone it brings. It really feels like being immersed into a whole other world. A very very whimsical world.”

Burton’s style is widely recognizable and it has even earned its own descriptory word, “Burton-esque” since it is so unique. The massive success of The Nightmare Before Christmas, which is named by many as the best Halloween movie, along with his other stop motion projects, has garnered misconceptions from the public in regards to confusing other stop motion films as his. Senior, Izabella Fonseca, one of those who was a part of the confusion said, “I thought for the longest time that Coraline and Paranorman were Tim Burton movies. Although he worked on Coraline, it’s not his movie. I just go around assuming every stop motion picture movie that has horror elements is a product of Tim Burton.”

It’s hard to see why his films wouldn’t be associated with the dark and macabre tone of the trick-or-treating holiday. The movies will live on during October nights for many years to come. “I can definitely still see his movies, particularly The Nightmare Before Christmas, being watched even 100 years from now. There’s a big hype around his movies  and the successful characters he’s made such as Jack Skellington,” Carrizales declared.

“Yeah, his movies never failed to come up during the season of ghouls and goblins. My Halloweens have never failed to have a Tim Burton movie sprinkled in. From as early as elementary school to now as a sophomore,” Simon added.