Spring Sports are Hopeful to Return to Play in 2021 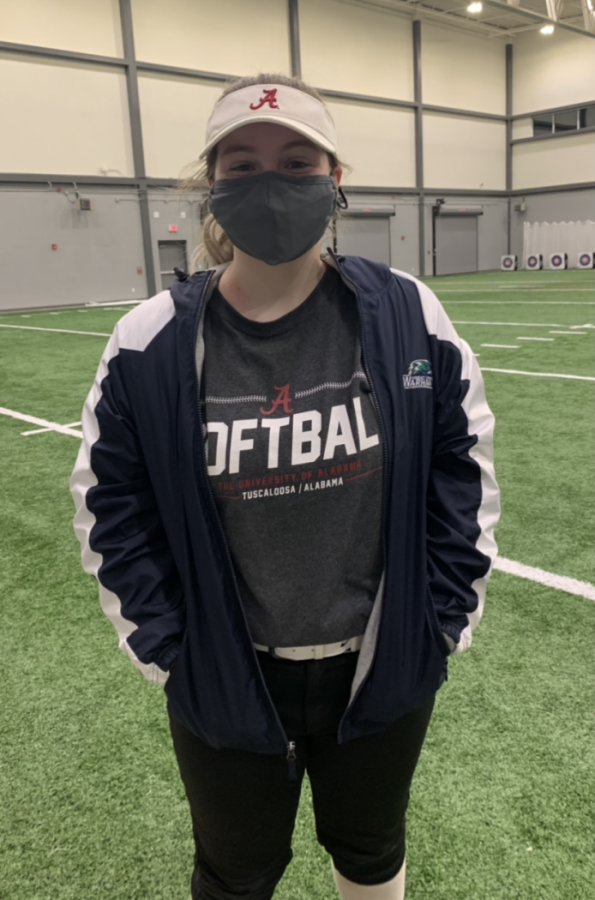 After having their first season as a Great Crossing team halted due to covid, the softball players are happy to return to play under new safety guidelines. Bella Freeman believes a return to sports is important for mental health.

When Great Crossing High School opened in 2019, a variety of students filled the halls. Students chose to attend the new school to get an education, to compete academically, and to show their athletic capabilities in their sport of choice. While it was a year of firsts in many aspects, athletic teams were excited as they were given the chance to build new programs and set the foundation for the teams to follow.

Softball. Volleyball. Lacrosse. Archery. Cheer. E-sports. Whether athletes were involved in one team or many, each student contributed to setting an expectation for all teams to follow during that first critical year. And they were excited to do so.

Although the fall and winter seasons were able to get in a complete season, spring sports teams were forced to shut down before they ever really got a chance to get started. Due to the COVID-19 outbreak that prompted the nationwide quarantine in March of 2019, many teams weren’t able to establish traditions for teams to follow and students were filled with a variety of emotions ranging from anger, frustration and disappointment.

The summer following the 2019-2020 school year was one full of uncertainty.  Education and government leaders contemplated whether or not a return to in person instruction and sports would be possible or appropriate for the time. . After a lot of debate, the Kentucky High School Athletic Association, the governing body for school athletics, decided that sports were permitted, as long as safety protocols were followed.

GCHS students were excited to hear that school sports would be permitted in some fashion.  Junior Autumn Baldwin, a lacrosse player at Great Crossing, was among the athletes impacted by the spring shutdown. She said, “Our season was cut in half last year.” Baldwin is hopeful that she will have a lacrosse season this year, although she understands that there may be limitations. “We can’t expect to have a normal season when we can’t even have a normal school day. I think whatever our coach or whoever is in charge decides, for this coming year, is what’s best for us.”

While Baldwin understood the need for the spring shutdown of her season, she is thankful to return to lacrosse this spring. “It’s relieving because it feels like it’s a step towards being normal again.”

As spring sports resume their seasons, the debate about whether athletics in a pandemic is appropriate, continues. Bella Freeman, junior, feels that athletics should be permitted. “I feel like all sports should get to play again without exception. As an athlete myself, I know how detrimental this forced break has been on other athletes who have had their season taken away. It does something to your head when something you’re so passionate about is taken away.”

Freeman continues, “When we were forced into quarantine in March of 2020, before we got to play our first game, everybody’s spirits were at an all time low. We weren’t able to participate in the one form of release that would have provided an escape from the anxiety, stemming from the virus.”

As many people may agree that all sports should be permitted during the 2020-2021 school year- even supporters of the return support the changes in the programs being made to keep players and fans safe from COVID, although they acknowledge they could be challenging to follow.

Longtime baseball player and junior at GCHS, JP Hopkins stated, “I think the safety aspect of it is not what people are worried about. They believe that fun and excitement comes before other’s safety. With that being said, I know that the school and the student athletes will do everything in their power to maintain a healthy athletic environment.”

The athletes advocating for the different teams had varying answers pertaining to if the return to school sports would create a spike in COVID cases in Scott County. While Hopkins stated that, “With the new vaccine no one knows what the future will bring, but I believe that with the right precautions and safety measures that COVID cases will remain steady/ decrease. I also feel baseball, lacrosse and softball should be permitted over other close-contact sports that could promote the spread of the virus.”

Baldwin acknowledged that school sports did come with some risk.  “There’s only so much that we can do to keep each other safe, and especially with lacrosse being a contact sport. With certain COVID restrictions in place, such as wearing our masks, social distancing as much as possible, and practicing in small groups, I think that this would be our best chance at keeping cases at bay.”

Many schools and student athletes are hoping to return to their 2020-2021 season,and they understand that adhering to the guidelines is the best way to protect their teammates and their chance of a complete spring season.