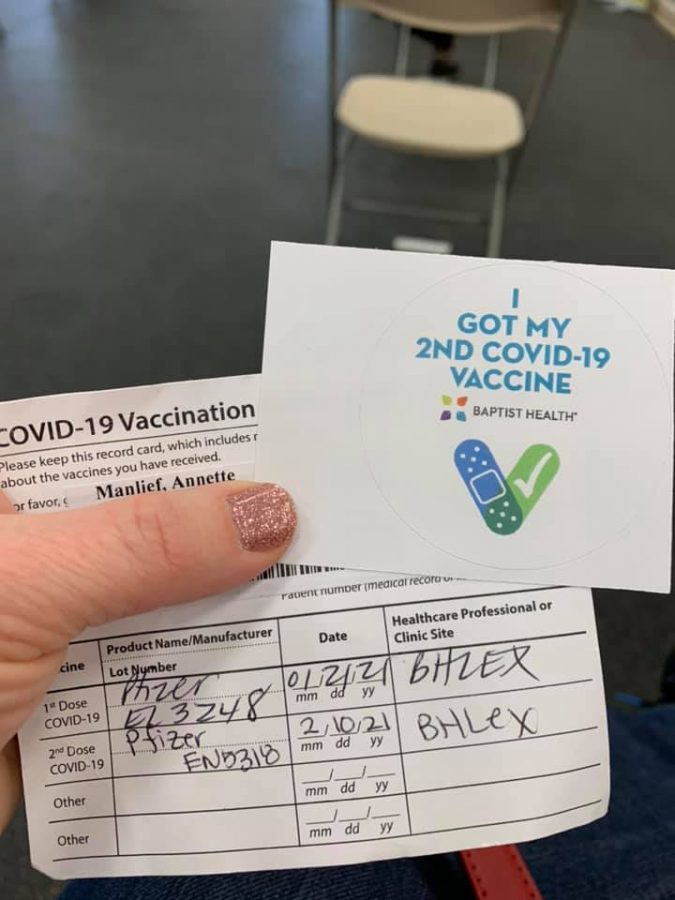 Annette Manlief chose to be vaccinated for COVID 19 and was appreciative of the opportunity to be in one of the early groups.

On January 30, 2020, the COVID-19 outbreak was declared a global health concern. Later in March of 2020, the World Health Organization declared the outbreak as a pandemic, and it has since affected over 100 million people. Now a year later a messenger RNA (mRNA) vaccination for the coronavirus has been developed to help protect individuals from illness due to covid, and to prevent further spreading.

A mRNA vaccination is a new type of vaccine technology.  Unlike others, such as the flu vaccine, the mRNA teaches your body how to make a protein that triggers an immune response, which in turn makes antibodies. This vaccination has not yet been fully approved by the FDA, but it has been released to the public under an emergency use authorization.  The first vaccinations began in the United States in December of 2020.

In the early months of 2021, teachers in twenty four states have gotten a priority spot on the list of essential workers to receive the vaccine. Kentucky has been one of the states designating teachers to be in one of the early groups, and this gave Scott County Schools teachers and staff access to the COVID-19 vaccine.  Teachers and staff had to make a decision to receive the vaccine, and if they chose to, they received the first dose on January 26, 2021 from the WEDCO Health Department.

Deciding whether or not to take this vaccine is understandably a heavy one to make due to how quickly this vaccine is being offered to the public. Jamie Wright, the GCHS choir director, stated “I thought it would be years before it would be completed. I am shocked that we have a vaccine for this a year later.”

Despite his surprise at how fast a vaccine was produced, Wright did elect to take the vaccine.  “I initially was skeptical about taking the vaccine. I don’t take Advil. I never get the flu shot. My deciding thought was… I don’t know the long term effects of Covid or the vaccine, so let’s roll the dice on this vaccine because science says so,” Wright explained.

Although it may seem like a miracle to have a vaccination for this virus in such a short period of time, some teachers were not yet comfortable getting the covid vaccine, because of the timeline it was released on and their belief there needs to be further study. Wylie Messer, the welding teacher at GCHS, said “It was definitely not an easy decision to make, and countless hours of research aided in the final decision.”

The fact that it has only been approved for emergency use was one of his main concerns.  Messer said, “I decided not to take this version of the vaccine due to the lack of supporting information behind this clinical study. I, in good conscience cannot commit to a medication that is not at least fully FDA approved… It is technically a clinical trial that has not been completely approved.”

For others the decision came a little easier. Nick Maxwell, a guidance counselor, said “For me, it was a relatively easy decision. I have been following the development of the vaccine and was aware of what was going on with both Moderna and Pfizer. This made me feel relatively confident in getting the shots. Also, I figured if I were to grow a third arm that it could be useful and decided to roll with it.”

Wanting to protect others was a factor that led to English teacher Lynn Fietcher’s choice to be vaccinated. She made her decision not for herself, but also for her daughter. “I took the vaccine for multiple reasons, but primarily to continue to protect my at-risk daughter. Many of my students know Betsy has had respiratory issues since she was a baby and has used an inhaler since she was four years old. We are taking multiple steps at home to keep her safe this year and the vaccination is just the next logical step.”