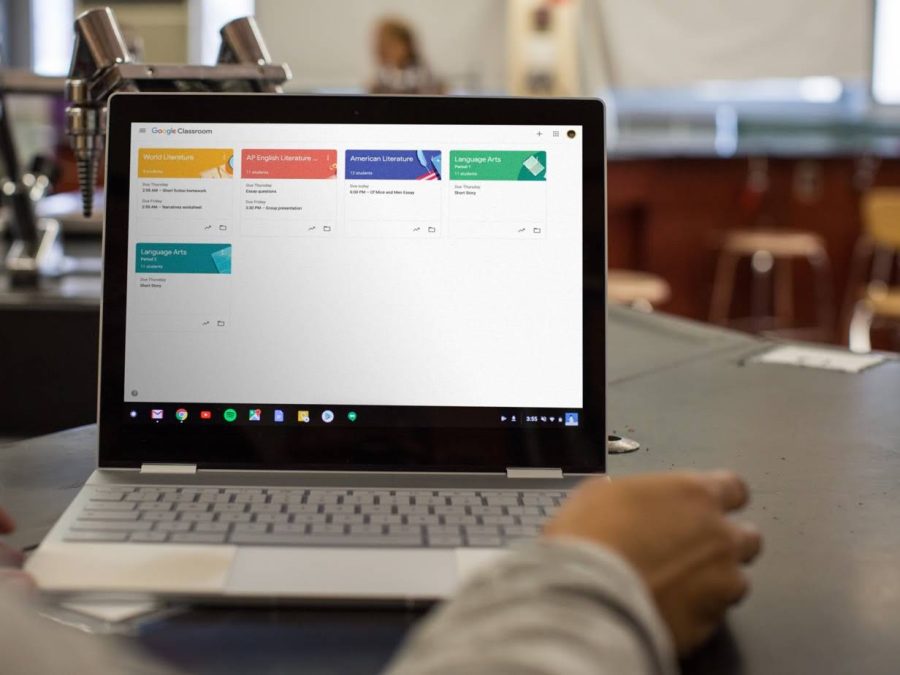 Students in Scott County Schools were all issued a chromebook to help with learning this year.

Since a global pandemic began in 2020, students have had to grapple with constant changes in how they approach school.  While the pandemic appears to be slowing down, students are still adapting to changes as Scott County Schools make the switch to a one to one format. One to one means that every student now has their own personal chromebook for school work, and are now able to complete more assignments digitally instead of pencil and paper. As a result, students are now navigating a new change in their learning.

While many students have had access to devices at home, having one available for every class every day is different.  Most students and teachers think this is a positive change.

Ashley Peoples is the school technology coordinator for GCHS and has oversaw the chromebook rollout to students this year.  She sees several benefits.  “I think it should be better than paper because it’s going to give teachers an opportunity to give different activities and to use different online platforms to give instructions. If we use something that’s more updated and more interesting to students, then I think that’s going to benefit students and teachers in instruction,” Peoples said.

Tucker Brewer is a technology co-op student.  One of his responsibilities is to help track the technology inventory for the school.  Going one-to-one now helps with inventory issues.  Brewer said, “Managing the school’s inventory of chromebooks has been significantly easier being 1 to 1, since every student in every classroom would have the opportunity to have a device. We no longer will have a lot of teachers fighting over an extremely limited number of chromebook carts.”

Going one to one also makes mandatory testing easier and less stressful for everyone involved.  Brewer explained, “All of the end of year testing becomes significantly easier. We will not have to take chromebooks out of carts and move them all around the buildings in exact numbers of what is needed, as each student will just bring their own and they can start testing immediately.”

Although having technology to help with school lessons is beneficial, like anything else, it does have some downfalls.  Many students would have preferred to have a choice as to whether or not they were assigned a chromebook.

The new one to one program requires all students to use their school assigned device rather than their own personal one.  Shepherd is not a fan of this requirement. “I don’t really like the idea of having to use the school’s chromebook. I am taking college classes, so I already have a computer to carry around, and the school one just adds extra weight to my backpack that doesn’t need to be there.”

With any new program, it will take time for everyone to adjust to the routine.  Peoples is confident that most students and teachers will come to view this as a positive change.  She said, “I am excited for what this is going to become. I know this year it’s going to be hard, and there is going to be major growing pains.  But I see in the future us being really able to do activities and have experiences in the classroom that we never had.”